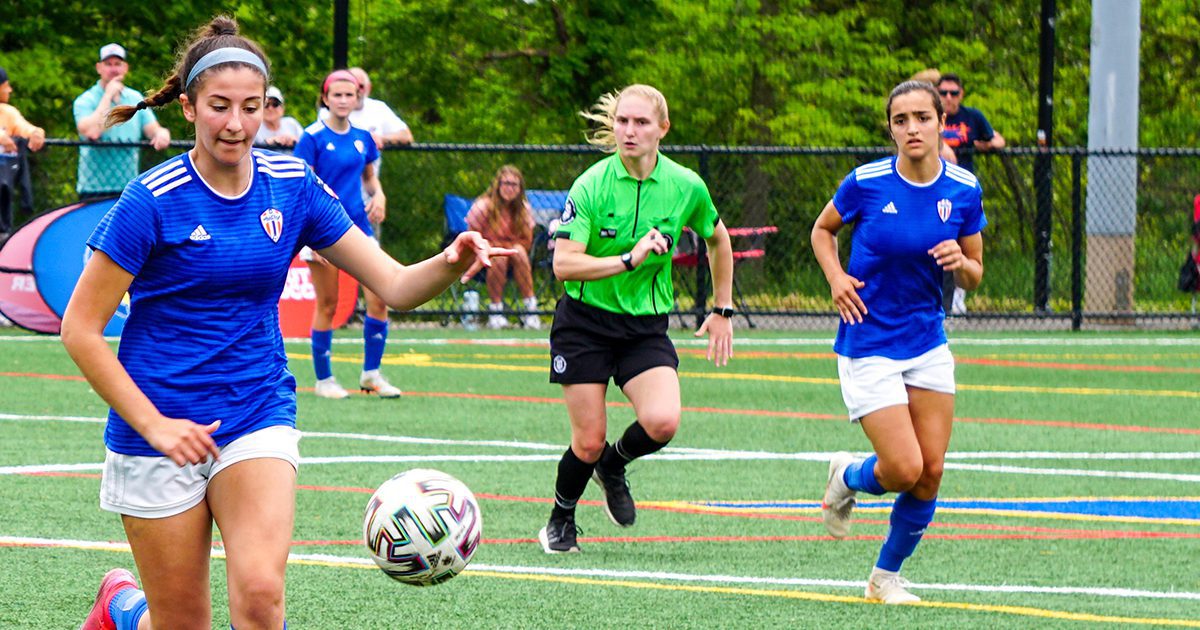 When New Jersey native Danielle Cornetta decided to become a certified state referee in 2018 as a high school junior, she did so to stay in touch with the game of soccer as she pursued her aspirations to play college basketball. What she could have never imagined at the time is she would be officiating on one of the grandest stages of youth soccer just four years later after being assigned to the prestigious 19U Girls Final at the US Youth Soccer National Championships in Orlando, Florida.

Working as the center referee in front of a packed stadium and a national audience watching on ESPN+, Cornetta and her team made a critical call on a late game-winner in the 87th minute. On the play, a ball was tapped just inches over the end line following a corner kick before quickly being cleared, but the officiating crew was well-positioned to make the proper ruling of a goal on the field. Photo evidence after the game proved they had made the correct decision, an incredible feat considering the frenetic atmosphere when the play occurred.

“It was an honor to be chosen as the referee for the 19U Girls National Final,” Cornetta reflected. “I was also pleased to have a reliable crew that I could count on. This showed in the dying minutes of the match, when my assistant referee was faced with a critical goal line decision in which the AR signaled that the ball had fully crossed the line, which made the score 1-0 with minutes to go. The match finished 1-0, and shortly after we were shown an image of the goal-line decision correctly given. The crew and I were delighted to see that our hard work and training had paid off.”

As soon as she became a referee in 2018, Cornetta immediately fell in love with her newfound craft. The accolades started coming to her shortly after that, and she was honored as the NJYS Female Youth Referee of the Year at the 2019 NJYS Awards Dinner Presented by RWJBarnabas Health. When asked about her journey as an official, Cornetta looked back on all of the hard work she has invested into becoming the best referee she could be.

“To be named a referee at the Youth National events, I climbed the ladder the typical way,” said Cornetta. “I was first invited to New Jersey State Cup, then invited to regional events as part of the New Jersey delegation, and then invited to Youth National events in the summer of 2021 and as a returner in 2022. Being a part of the New Jersey delegation allowed me to grow as a referee through mentorship from the NJ State Referee Committee, specifically NJ State Referee Administrator Barry Towbin and NJ National Assignor Kenneth Henriques. The NJ State Referee Committee provides monthly education sessions open to all referees as well as mentors at events to provide feedback and advice. I am also a part of the NJ Referee Development Academy, which allows me to receive coaching sessions as well as partake in group meetings and discussions with other referees.”

Prior to earning her spot as the center referee for the 19U Girls Final at the US Youth Soccer National Championships, Cornetta had worked at previous national youth soccer events.

“The first Nationals event I attended was as an assistant referee in the summer of 2021 in Bradenton-Sarasota, Florida,” she recalled. “Alongside other fellow New Jersey referees invited to the event, Justin Saporito and Kenny Freeman, we sought to make the most out of this event by attending coaching sessions, post-game debriefs and learning from other referees across the country. The highlight of this experience was being selected to officiate the 18U Girls Final as an AR alongside Kenny Freeman.

“In summer 2022, I returned to Youth Nationals in Orlando as a referee. Despite long days and harsh weather conditions, I again wanted to make the most out of this opportunity both on and off the field. Here, I was able to develop relationships with other referees from other states that I keep in touch with to this day. Overall, attending Nationals had a positive experience through my continued education and lifelong relationships.”

As someone who has quickly, and deservedly, climbed the ranks as a youth soccer referee, Cornetta offered some advice to individuals who may be interested in following in her footsteps.