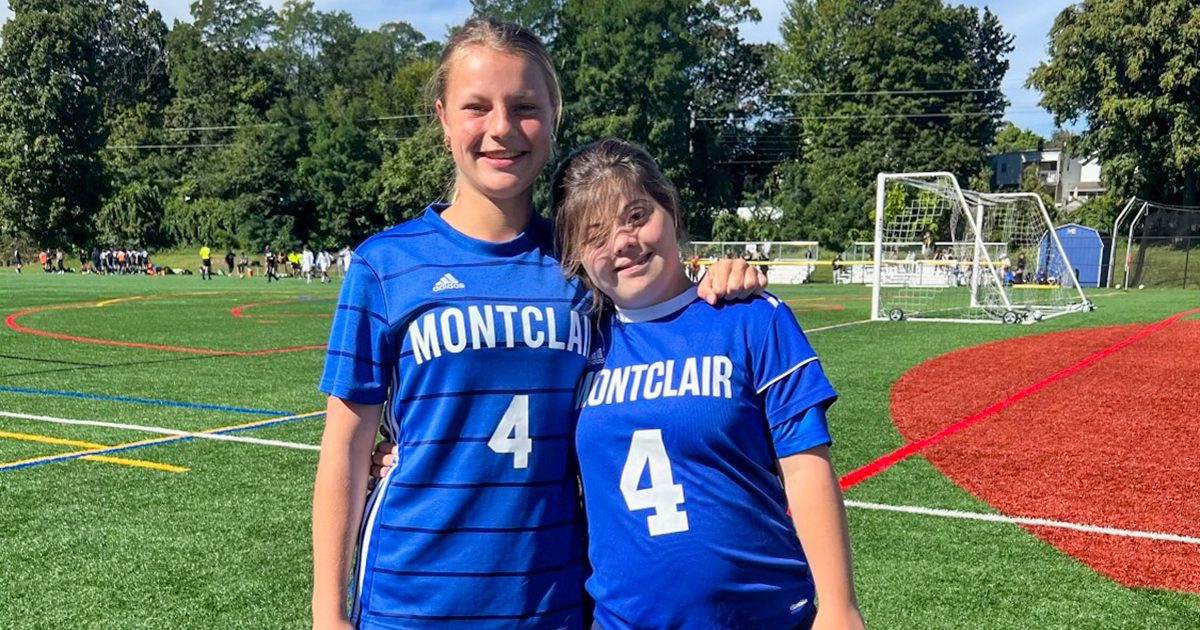 When Mitch Heisler spearheaded efforts to bring a TOPSoccer Program to Montclair United Soccer Club nearly 10 years ago, he immediately spoke to his good friend, Andrew Lacey, about getting his daughter, Evelyn, involved. Evelyn, who has Down syndrome, had played soccer on local recreation teams at a young age, and Andrew agreed that TOPSoccer would be an ideal transition into her next chapter of learning the game.

“As soon as she got involved with TOPSoccer, Evelyn loved it,” Andrew recalled. “A unique element of TOPSoccer at Montclair United is that we really empower the high school kids to run the program, and that helps them become even more committed to it. The combination of playing soccer and getting to hang out with the high school kids made it very special for her.”

TOPSoccer is a community-based training and team placement program for young athletes with special needs. The emphasis of the program is on development, training and meaningful participation, rather than on competition. Volunteer assistants in TOPSoccer partner with participants during the training sessions.

“Something that has been very beneficial to Evelyn is the consistency of the routine with TOPSoccer,” Andrew continued. “With their training, some of the games are played week in, week out, and that helps her to keep getting a little bit better at them as time goes on. The relationships and bonds that build between the kids and their high school partners is really special to watch as well. During their time together at TOPSoccer, there are no walls or barriers between them. They are just all there having a great time.”

The love that Evelyn has developed for soccer throughout her lifetime became even stronger when she started attending Montclair High School. The head coach for the girls soccer team at the school is Ashley Hammond, who had previously worked as the Director of Coaching at Montclair United Soccer Club. His son, Shea, also manages cerebral palsy, but he has never let it hold him back. Shea represents the U.S. Paralympic National Team, and he currently attends Clemson University where he plays with Clemson Paralympic Soccer.

When Evelyn was a freshman at Montclair High School, her older sister, Paige, was beginning her senior season as a member of the girls soccer program. Paige herself had served as a co-leader of Montclair TOPSoccer for three years, a family tradition that has since been followed by their other two siblings, Derek and Abby.

Wanting to be closer to both Paige and the game of soccer, Evelyn and her best friend, Jessica, decided to become managers of the team as they entered high school. However, Coach Hammond eventually had something grander in mind. After speaking with Andrew prior to her senior season, Evelyn began participating in a portion of training each day, but the ultimate goal was to get her onto the field in a live game. And soon enough, that day came.

“Evelyn was super excited about getting to play with her teammates. She was so proud that she was getting her own uniform,” Andrew reflected. “Although she may not have the stamina to participate in a two-hour training session, she could work with the team for 45 minutes, take part in warmups and work on some basic dribbling and passing. We told Ashley she would respond best to being told that she had to earn her jersey by coming every day and doing what was asked of her. That way, she had something to motivate her and get her excited about going to practice each day. Something that was important to me, my wife and Ashley was this not being a situation where the kid with Down syndrome got on the field and everybody just stood there while she dribbled around.”

About a month into the season, Coach Hammond told Andrew after a training session that he planned to put Evelyn into a game the next day. All of her hard work and dedication had paid off.

“Throughout her life, a major goal of ours has been to get Evelyn included in school and the community in as many ways as possible,” Andrew said. “Seeing Evelyn receive her jersey for the first time and then participate in warmups just like everyone else was just so special. There was a lot of people there because it was Senior Day, and it was really cool to see all of the kids and parents cheering for her. Honestly, the best part was when everything calmed down, and she was just out there on the field with the rest of the team. She was being included, and that is what we have always wanted for her. Seeing it happen on the field was just really cool.”

Soccer has been truly transcendent for Evelyn as a youth and into her development as a young adult. Andrew encourages parents in a similar situation to pursue options such as TOPSoccer to see if they can be beneficial for their child.

“It is so great for any child to be out there in an environment like TOPSoccer or recreation soccer, or any sport for that matter,” he remarked. “The more they do it, the more comfortable they will get. Just remove certain expectations from your head and allow the child to enjoy the game and grow over time. That is what we have seen with Evelyn. She has gotten a lot better over a long time, but it did take a long time for it to happen. Now, she knows a ton about soccer and truly loves the game. She makes sure to tell her brother what he does wrong when he is on the field now, and it is fun! This has become a big part of our family experience.”

In conclusion, Andrew reminded parents that the only way to begin a long journey is to take the first step.

“I say to get them out there and keep at it,” he encouraged. “What takes time is for kids to get comfortable with the routines, and sometimes they do not have the stamina or the attention at first. Over time, it keeps improving. So just get them out there and give them the freedom to stay at it for a while.”